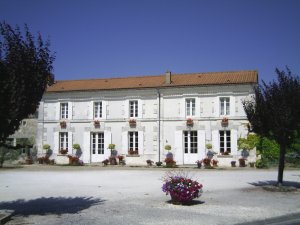 Village house with barns on the Dordogne / Charente border, France

Four bedroom village house with three barns, one of which has been converted to house an indoor heated swimming pool and another with the potential to be converted into gites, near the towns of Chalais and Montguyon on the borders of the Dordogne and the Charente, France

Impressive village house with one converted barn into indoor swimming pool, one smaller attached barn unconverted, one larger barn accessible form the main house, with possibility to convert into a four bed gite or extend the existing house.

The main house has four converted double bedrooms and also has a large section above the heated indoor swimming pool that could be converted into two extra rooms or storage. All rooms have wooden beams and flooring. All of the house has brand new electrics and central heating. There is a large kitchen which comes fully equipped including a beautiful Paul Bocuse double oven, a large dining room, a large salon and three shower rooms.

Attached to the back of the house is the first of the barns. It was originally the village dance hall, which dates back to roughly 1850, and this has been converted into an indoor heated swimming pool with attached shower and utility room.

The second barn is unconverted but backs on to the garden, it would make a beautiful garden room once converted.

The third barn is also unconverted but it has the possibility to convert into a superb gite or dwelling.

There is a private 450sq metre garden with mature trees, bushes and outdoor cooking area, with hot and cold tap, cooker, sink and gas, a beautiful covered well, and a separate area for four or more vehicles.

The house is in a quite village location surrounded by open countryside on the borders of the Dordogne and Charente, one hour from Bergerac airport with daily flights into the UK. The property is 45mins from Bordeaux, 15mins from the N10 and railway 10 mins. 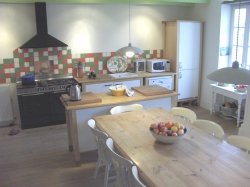 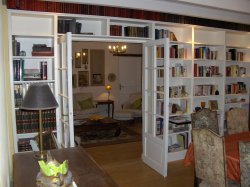 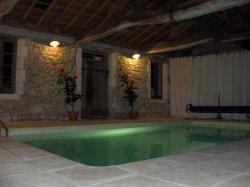