An oak and elm barn frame, repaired, dismantled and labelled and located near Bures in Suffolk

Timber barn frame of oak and elm construction located near Bures in Suffolk which has been repaired, dismantled and marked for ease of assembly and is ready to be removed by the buyer

This barn of indeterminate age was once the main building on a small North Essex farm. The farm house was demolished in the early sixties (being condemned by the local council) as were the smaller buildings, the farm being redundant.

The barn however was retained and used to house farm machinary until one morning in March 1987 when a spring gale swept through the rear doors and blew the whole building into a sorry heap of timbers.

It lay where it fell for some 18 months or so at which point I rescued it, making a plan, numbering the bits and putting them into dry store.

Seventeen years later in 2004 it was decided to get the frame out of store to renovate it. Four oak trees were felled on the farm and sawn on site into barn sized timber for plates and studs for use to replace the rotted or missing bits.

After three enjoyable weeks of cleaning, puzzling and sawing two of us had repaired and re-assembled the frame with the exception of the roof timbers. It had been decided not to bother with the roof as in all probability a new roof would be required in its new life particularly if it is to be a house.

Seventy percent of the original roof timbers are present and clean. Photos were then taken, each timber marked and a plan was drawn up. The frame was then taken apart and placed on pallets under cover.

The overall length of the frame is approx 48ft 8ins, the width of the main hall is approx 17ft 3ins and the outshot on the front is approx 11ft 7ins by 12ft 5ins. The post height is 12 ft 2ins which makes the height from the ground to the top of the top plate approx 12ft 10ins.

The barn had originally been constructed on a 5ft brick plinth. There are a pair of knees for each main truss complete with original bolts (some repaired). There are some hinges, nails, a box of oak pegs and several photos. 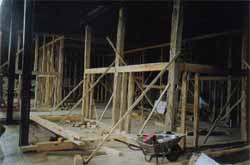 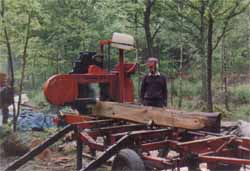